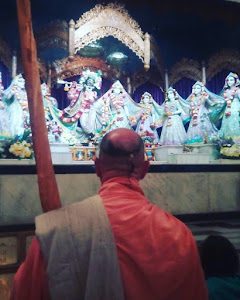 February 5, 2018 : Longing For Your association

“Dear Bimal Prasad: Not a day goes by that I don’t think you. And on some days I cry remembering our deep friendship and the service we did together for Srila Prabhupada. Myself, Alalanath prabhu, Gaura Shakti and your good wife, Lalita devi, talk about you all the time. I long for your association again one day!”

Maharaja quoted the following poem by an anonymous poet,

“If tears could build a stairway
and memories a lane,
I’d walk right up to heaven
and bring you back again.
Few farewell words were spoken,
so little time to say goodbye,
you were gone before we knew it
and only God knows why.
Our hearts now ache in sadness
as tears begin to flow,
what it meant to lose a friend like you,
no one will ever know.” 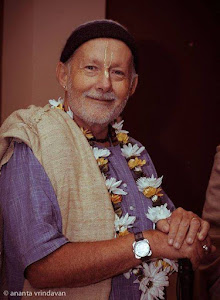 As promised, Indradyumna Swami Maharaja returned to the town of Bharatpur, one hours drive from Vrindavan, with a large harinam party. Bharatpur is famous as the “Iron Fort.” Due to it’s heavy defenses it was never conquered by Muslim invasions or during British rule. Not conquered that is, until Indradyumna Maharaja and his associates flooded the town with the nectar of the holy names of the Lord! People were initially stunned to see them, but were soon waving and smiling as they passed by. A number of citizens joined their chanting party and danced with them in great happiness. The harinam party distributed many books and thousands of pieces of prasadam. Afterwards they visited a newly opened museum in the King’s Palace. What a joy to spread the holy names here, there and everywhere! 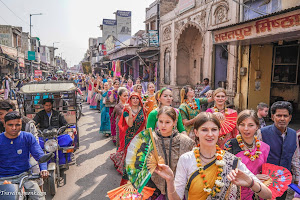 For the last few days Indradyumna Swami Maharaja has been taking a group of devotees and some very fired-up gurukula boys to a few of his favorite places in Mayapura; such as the samadhi mandir of Srila Bhaktividnode Thakur, Nrsimha-pali -where Lord Nrsimha rested rested after killing Hiranyakasipu and Hari Hara ksetra. Maharaja also attended the installation of main chakra on top of our new temple being built in Sridham Mayapura. It was a big step towards the completion of the temple, expected to open in 2022. 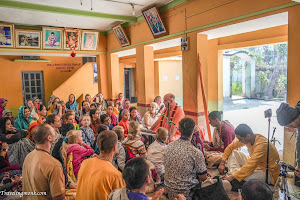 Indradyumna Swami Maharaja led a group of devotees on parikrama to Shrikand: a favorite place of Lord Chaitanya Mahaprabhu, and the bhajan kutir of Narahari Sarkara Thakura. The devotees immersed themselves in hearing the holy names and the pastimes and glories of Lord Caitanya and His beloved devotees. Maharaja also led Nagar Sankirtana in the holy Dhama.

Ever since taking sannyasa in 1979, Indradyumna Swami Maharaja had a strong desire to visit the town of Katwa, where Lord Caitanya Mahaprabhu took sannyasa 500 years ago.His wish was fulfilled when Maharaja and 60 devotees made the 2 hour journey from Sridham Mayapura to Katwa. Naru Gopal prabhu took them to the exact spot where Mahaprabhu was shaved up by a barber and where He took His sannyasa vows from Kesava Bharati Maharaja. He expertly described the pastime in great detail. Afterwards the group took darshan of the samadhi where Lord Caitanya’s hair is kept, as well as the samadhi of Kesava Bharati Maharaja. Indradyumna Swami along with his associates prayed at the historic tree under which Lord Caitanya’s beautiful long hair was shaved and also bowed down to the samadhi of Das Gadadhar. Naru Gopal explained that Lord Caitanya had kirtan where we were for 3 days straight after taking sannyasa. Following in His footsteps they chanted and danced for hours in front of a beautiful deity of Lord Caitanya in a large temple on the grounds. It was a most wonderful day! All glories to Sri Caitanya Mahaprabhu! All glories to Srila Prabhupada! 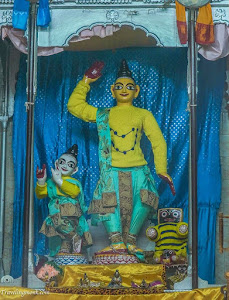 Indradyumna Swami shared the following poem by a medieval poet, Govinda Das called The Chariot of the Mind glorifying the lotus feet of Lord Gauranga:

The Chariot of the Mind – By the medieval poet, Govinda Das

By drinking the nectarean honey of the lotus feet of Sri Gaura, by singing the glories of Sri Gaura’s deity, by listening to the instructions of Sri Gaura, and by associating with devotees who follow his instructions, so many fortunate individuals experienced the joyous waves of prema.

O mind! Why do you keep burning repeatedly in the fire of worldliness? Simply keep chanting the mantra of your dear Lord.

Think carefully about the ultimate aim of your life and then climb on the chariot of the [purified] mind. Make the feet of Lord Gaura your charioteer.

Engage your five life-airs (prāṇa, apāna, udāna, vayāna and samāna) as the five horses driving this chariot. Let āśā, the hope of attaining the Lord, be the strong rope controlling these horses so that the chariot may never break down.

Using this chariot, go quickly towards the shore of the unlimited ocean of the Lord’s loving pastimes. Having reached there, bathe thoroughly in the waves of this ocean of prema.

In this ocean, you will swim along with other servants of Hari who are delighting in the waves of bhakti-rasa. These servants of Hari will fetch you the rare jewel of prema from the depths of this ocean and will thus fulfil your most cherished desire.

In the middle of that ocean of bhakti-rasa is a house decorated with precious jewels in which brilliant complexioned Radha and dark complexioned Shyam reside.

The charioteer, Lord Gaura’s lotus feet, will help you meet these two, Radha and Shyam. It is for this reason that Govinda Das sings the glories of Gaura. 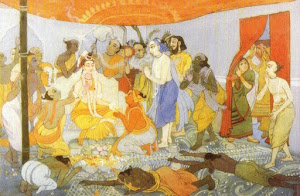 Indradyumna Swami Maharaja took the devotees to Koladwip. The devotees engaged in hearing Lord Caitanya’s pastimes and relished the chanting of the Hare Krishna Mahamantra in the sacred dham. Maharaja also led Nagar Sankirtana in the holy Dhama.

Indradyumna Swami Maharaja tool a large harinam party of international devotees through the streets of Navadwip in Mayapura. Remembering that Lord Caitanya Himself chanted and danced through the same town 500 years ago the devotees were in ecstasy. The people of Navadwip loved their harinam. Maharaja and the devotees also took darshan of the famous deity of Lord Caitanya worshipped by Visnupriya after the Lord took sannyasa. There they had kirtan for hours! They ended the day by visiting the samadhi of Srila Jagannatha das babaji. So happy to be in the land of kirtan! 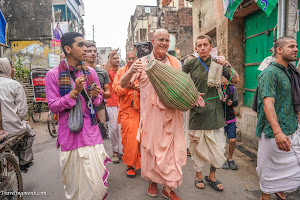 On the 15th of February, Indradyumna Swami Maharaja took a large group of devotees to Santipura. There in the temple of Madan Mohan they had darshan of the original salagrama- sila worshipped by Advaita Acaraya to invoke the advent of Lord Caitanya Mahaprabhu. By some incredible and causeless mercy the pujari kindly placed that most worshipable salagrama-sila on Maharaja’s head for several minutes as he prayed feverishly for more service in spreading the holy names of Krsna all over the world. It was an amazing experience and a highlight of Indradyumana Swami’s visit to Mayapura. Afterwards, the group had a roaring kirtan in front of the temple and later drove to Phulia to see the bhajan kutir of Haridas Thakur, where they heard his glories from Naru Gopal prabhu. 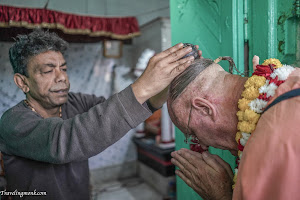 Indradyumna Swami Maharaja left Mayapura yesterday for a two-week preaching tour in South Africa. On the way through Kolkata he stopped by the Bhaktivedanta Research Center. The BRC is a project started by Maharaja’s godbrother Hari Sauri prabhu for the purpose of gathering, preserving and disseminating the works of the previous acaryas on Gaudiya Vaisavism and other Vedic literatures. At present the library has over 20,000 books, including a hand-written autobiography by Srila Bhaktivinode Thakur.  The BCR has the backing of many important scholarly institutions and world renown professors. Indradyumna Swami requested everyone to visit the BRC at: www.brcindia.com and donate to this important project that was originally inspired by Srila Prabhupada himself. 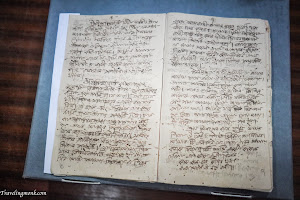 During a routine medical exam on February 19th in Durban, South Africa,the doctors discovered a large renal stone ( kidney stone ) in Indradyumna Swami Maharaja’s left kidney. Today Maharaja will be in hospital for a 90-minute procedure under general anesthesia to remove it. The procedure is called Lithotripsy, wherein a laser is used inside the body to destroy the stone. During the operation a stent is placed near the kidney to facilitate drainage. It is removed 2 to 3 weeks later in another operation. This is not major surgery and Maharaja will stay just one night in the hospital and be back to normal in a day or two, if there are no complications. Indradyumna Swami wanted to share the details as he didn’t want the news to get distorted. Maharaja said, “I’ll be fine”.

Indradyumna Swami Maharaja’s kidney stone operation was successful. So much so, that they didn’t have to insert a stent. Maharaja is out of the hospital. It may even be possible for him to attend the premier of Yadubara’s new film in Durban tonight. Maharaja thanked everyone for their prayers and best wishes.

Some of the disciples of Indradyumna Swami have taken up the service of regularly posting his Facebook updates, information on new classes and other news related to his travels on Twitter. For those of you who use Twitter please check out.

My Dear Mahamaya dasi, Please accept my blessings. I have received your letter undated, and have noted the contents carefully. I am very pleased by your attitude to surrender yourself completely by engaging cent per cent in Krishna’s service. Somehow or other always to be thinking about Krishna, that is the goal of Krishna Consciousness process. So now you please help me to spread this information all over this earth planet, especially by helping to distribute my books and literatures, as many as possible. Then you will get the credit, and know it for certain that very soon you will go back to Home, back to Godhead.

I hope this finds you in good health and cheerful mood. 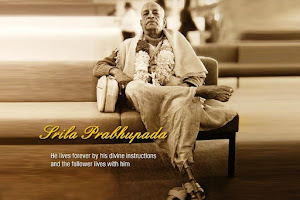 February 26: How To  Offer Prayers

Offering sincere heartfelt prayers to Krishna is one of the nine limbs of devotional service. Indradyumna Swami Maharaja said, ” A child learns to talk by imitating his parents. Similarly by repeating the prayers of great devotees, following in their footsteps, we also gradually develop genuine devotional sentiments for the Lord. Many great devotees have revealed their hearts in granthraj Srimad Bhagavatam”. 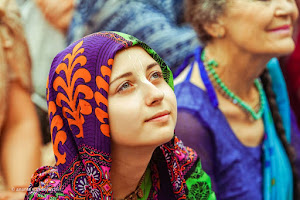