Local lore here in Vrindavan says that many years ago this tree in the courtyard of the Syama Rai temple in Vrindavan was to be cut down to give more room for visiting pilgrims. However, one night the pujari had a dream. In the dream the tree appeared and begged the pujari not to cut him down. He said in a previous life he was a Vaisnava in Kasi ( Varanasi ) who was always praying to take birth in Vrindavan. In his next life he took birth as that tree and was fully satisfied having constant darshan of the deity of Krsna in His form as Syama Ray. So he remains in the courtyard to this very day! 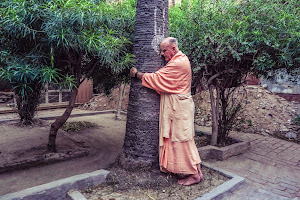 Yesterday, just after arriving back in Vrindavan, Indradyumna Swami Maharaja and his associates walked through the tiny streets and alleyways of the town to the bhajan kutir of Srila Krsna das Kavriraj Goswami, the famous author of the epic Caitanya Caritamrita, There Maharaja saw his worshipable murti, as well as the Radha Krsna deities of his first disciple, Mukunda das Goswami. The group was also privileged to have a rare darshan of what the pujaris there say is the original Caitanya Caritamrita written by Kaviraja Goswami himself. They also showed them a painting that Kaviraja Goswami is purported to have painted. Many thanks to those pujaris! An amazing first day back home, in Sri Vrindavan Dhama! 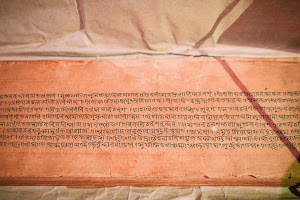 Today on the parikrama of Radha Kunda Indradyumna Swami Maharaja came across a large assembly of local sadhus listening to his good friend Pundrik Goswami from the Radha Raman Temple speaking on Srimad Bhagavatam. As soon as Goswami saw Maharaja he had him escorted up to the front. Towards the end of his lecture he asked Maharaja to come sit on the stage with the older sadhus. He then asked Indradyumna Swami to speak to the assembly, but as it turned out there wasn’t enough time. After the program Maharaja mingled with a number of the well known babajis and shared with them the preaching he is doing in western countries under the order of his spiritual master, Srila Prabhupada. Many were appreciative. It was a special opportunity in a very special place. 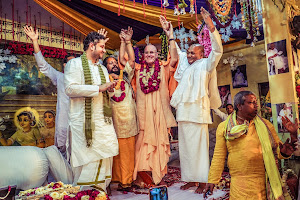 Indradyumna Swami found a new treasure for the Kartika parikrama group next fall: Kishori Kunda. Situated at the base of Javat, Kishori Kunda is the site of a number of Radha and Krsna’s pastimes; including when Radharani dresses up as a cowherd boy during Gopastami to facilitate meeting Her beloved Lord. While living at Javat, Radharani bathes each day in Kishori Kunda and Krsna often decorates Her lotus feet with ankle bells there. Lokanatha Gosvami did his bhajan at Kishori Kunda. During the rainy season he would stay under a tree there with an old quilt and torn clothing. When it would rain he would put his Deity of Krishna, Sri Radha-Vinod, in the hollow of a tree and stay outside in the rain. After exploring Kishori Kunda Indradyumna Swami visited Javat and the many wonderful Vrajavasis living in that sacred village. 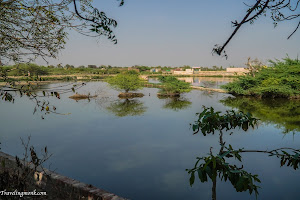 Today Indradyumna Swami visited the village of Pentha Gaon, where all the residents of Vrindavan entered under the shelter of Govardhan Hill as Krsna held it up with the little finger His left hand.

In the village there is also a large tree trunk, which is worshipped daily by the people. When the gopis were searching for Krsna after the rasa dance, Krsna hid behind this tree. While doing so, He asked the tree not to let anyone know He was there. But when the gopis came and asked the tree where Krsna was the tree immediately replied, “Right behind me!” In this way the gopis found Krsna. Krsna, however, was upset with the tree and He playfully grabbed and twisted it many times. One can easily see these twists in the tree. 40 years ago a carpenter unfortunately cut the tree in half. 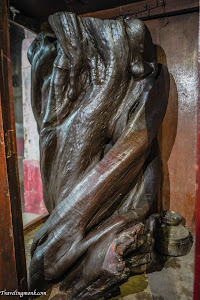 Yesterday Indradyumna Swami and devotees traveled through the countryside of Vrindavan on dusty roads to the village of Phalain, where they took darshan of Prahlada-kunda. Prahlada-kunda is said to be the home of the great devotee Prahlada Maharaja and the place where the Holika-dahan festival – a precursor to the famous festival of throwing of colors – is celebrated. Every year, during the full moon night in the month of Phalguna, the Vrajavasis celebrate the death of Hiranyakasipu’s evil sister, Holika at Prahlada- kunda. When Hiranyaksipu was unsuccessful in trying to kill his son Prahalda Maharaja, he approached Lord Siva and asked for the ultimate weapon of destruction: the fire that Siva employs to destroy the cosmic manifestation. With that benediction Hiranyakasipu built a huge funeral pyre and put his sister Holika on top of it, with Prahlad in her lap to make sure he didn’t escape. Holika had a benediction from Lord Brahma that she could never be burned by fire. When Hiranyakasipu lit the fire it burned for a long time. But in the end, Prahlada was seen blissfully chanting the holy names and Holika was burned to ashes. The acaryas say that her offense to a pure devotee, Prahlad Maharaja, nullified the benediction of Brahma. The Vrajavasis, honoring the sraddha, or deep faith of Prahlada Maharaja, burn an effigy of Holika each year to celebrate the pastime. Prahlada Maharaja lives eternally on Lord Nrsimhadeva’s Vaikuntha planet, but Krsna remembered Prahlada every year when He was present in Vrindavan by celebrating His devotee’s strong faith in divine protection at the festival at Prahlada-kunda. 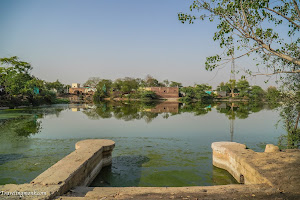 Today Indradyumna Swami and devotees visited a number of places related to the Brahma Vimohana Lila in which Lord Brahma steals Krsna’s cowherd boyfriends and cows. They took darshan of an ancient tree the boys took prasadam under, the exact place where Brahma stole the boys and cows, the cave he hid them in and the kunda where his tears of remorse filled up as a lake. Quite an adventure for one day! 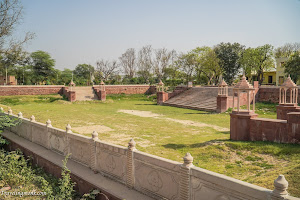 Today Indradyumna Swami Maharaja visited Bhayagaon, the village of fear. The fear refers to when Nanda Maharaja bathed too early one morning in the nearby Yamuna river and was arrested by the servants of Varuna. He became fearful but was soon saved by Krsna. Bhayagaon is also where Jiva Goswami, having once displeased Srila Rupa Goswami, was ostracized by Rupa and lived in a cave for sometime performing numerous austerities and chanting the holy names. Eventually, Rupa Goswami lovingly accepted him back. Maharaja and the devotees spent a lot time in the cave meditating on the many instructions to be learned from the pastime. 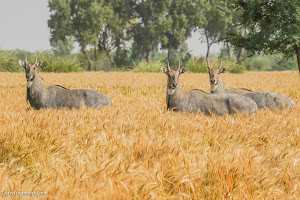 Today Indradyumna Swami and the devotees were blessed to visit the original Chir Ghat, where Lord Krsna stole the clothes of the gopis. There they embraced the same tree that Krsna sat in 5,000 years ago. Nearby they took darshan of the goddess Katyayani, whom the gopis prayed to get Krsna as their husband. The whole experience was very deep and mystical and was enhanced by the extraordinary beauty of the Vrindavan countryside. 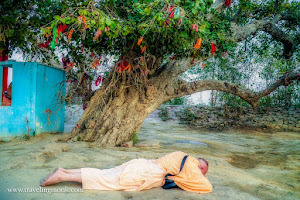