I have been at Govardhan Eco Village outside of Mumbai, India for almost 2 months now. Each morning I walk in the natural pristine beauty of the community, marveling at the many projects that have won the devotees awards for sustainability and in the field of ecology. It is a ‘must see’ for all ISKCON devotees visiting India! 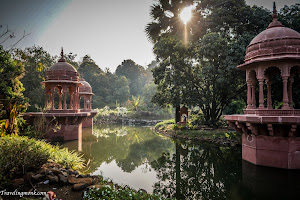 A new video from Ananta Vrindavan! During our 2018 Kartik Parikrama we visited the village of Dauji, named after the presiding deity of the town, Dauji. Dauji means “the older brother” and is a name for Lord Balaram, Lord Krsna’s older brother. During that parikrama we discussed Dauji’s pastimes and had A big Kirtan at the temple. All 500 of our parikrama devotees felt great bliss. We also did Harinam through the town, much to the delight of the townspeople!

Video of The Older Brother

March 5, 2019: Lord Ramacandra With The Chiefs Of His Army

Also standing behind Lord Ramacandra are Hanuman, Angada, Arunda, Nila and Samrambha. They all hold maces in their hands and wear golden crowns.

In front of Lord Ramacandra stands King Sugriva holding an umbrella in his left hand and a mace in his right hand. He is followed by Nala, Vanara, Durvinda and Rambha who all hold maces.

I have been at Govardhan Eco Village now for two months. Today I walked around the project and took photos for one last final album. Tomorrow I leave for Sri Vrindavan Dhama. I will feel great separation from this peaceful, quiet and beautiful spiritual abode. I made so many friends amongst the resident devotees, the gurukula boys, the guests, the cows, the dogs, the birds …. everyoneI! I’ll miss my daily morning walks with Radhanath Swami, kirtans with the yoga groups from the west, my evening visits to the gosala, the darshan of Madan Mohan up on the hill – the list goes on and on. I encourage all devotees to visit this project. It’s unique within the world! 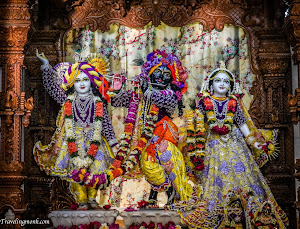 On my first day back in Vrindavan I went to Varsana, the home of Srimati Radharani, in the early morning hours with a small group of devotees. As we traversed the trail up the mountain to the magnificent temple on top, family after family invited us into their humble homes to take prasadam. I am so happy to be back in this transcendental abode in the association of the wonderful people who live here! 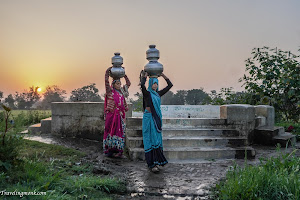 Last weekend myself and BB Govinda Maharaja attended a memorial festival for Tamal Krsna Goswami at the ISKCON temple in Pune, India. The event was organized by one of his admirers, Madan Mohan Mohini dasi. Thousands of people attended, attesting to the wonderful service that Maharaja rendered to Srila Prabhupada in his lifetime. 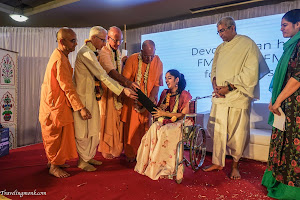 There was a myriad of activities on Gaura Purnima in Mayapur, including Bhakti Arjava Priti Vardhana Swami taking sannyasa from Jayapataka Swami, huge kirtans in the temple, a public abhisekha attended by many thousands of people and a huge feast after sundown. A perfect day in a perfect place! 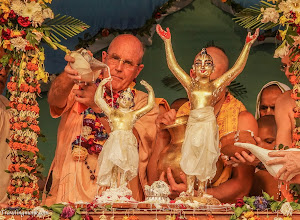 When a disciple asked Srila Prabhupada what he should do while in Vrindavan, Srila Prabhupada replied, “Just wander!” Today I took a small group of devotees to several holy places we had never been to. What an adventure it was! We first went to Encha Dauji [ Ram Ghat ] where Lord Balaram pulled the Yamuna river with His plow. Then we proceeded to Biharvan, where Radha and Krsna had many pastimes. The forest there is very much like it was thousands of years ago. Then we went Tapovan where the young gopi girls did austerities to please Katyayani to get Krsna as their husband. Finally went to Devi Attas, where Yogamaya appeared after flying out of Kamsa’s grip in the Mathura prison. What a wonderful day! 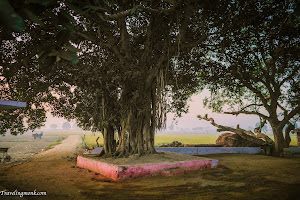 Today we went on parikrama to Akrura-sthan, where Akrura stopped his chariot to take bath in the Yamuna while taking Krsna and Balaram to Mathura. When Lord Caitanya visited Vrindavan He would sleep under a Banyan tree there every night. That tree, in it’s entirety, still exists. We chanted and prayed under the tree for sometime. There is a temple there with many beautiful reliefs and paintings. We will take our Kartika parikrama to Akrura-sthan next October. It is a wonderful service to be searching out all these holy places in Vrindavan for the pleasure of the Vaisnavas! 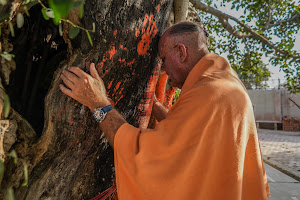 In Vrindavan, down near the old Vrindavan Post Office, is a small street where Lord Balarama has been hiding for a long time. Devotees rarely, if ever, visit this temple. The pujaris claim that this deity was one of 5 Balarama deities commissioned by Vajranabha, the great grandson of Krsna. The deity appears very, very old and in the same style of Dauji in the village of Dauji, and Govindaji in Jaipur.

We found reference to their claim in Garga-samhita:

“Besides this, he also established five deities of Balarāma in Vraja-maṇḍala for the welfare of everyone.”

Also in the temple is a ancient deity of Revati, Lord Balarama’s consort.

As our beloved Srila Prabhupada established the worship of Krsna and Balarama in Vrindavan, I thought devotees would like to visit this historic deity of Balarama. He need hide no more.

The temple barely has enough funds for flowers! 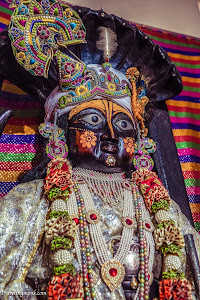 March 31, 2019: Album- Up On The Hill
Last week in Vrindavan we visited the beautiful deity of Sri Sri Bhatraud Behari. Bhat refers to rice. Krsna enjoyed rice along with his friends on the hill where the temple now stands. This is an area where Krsna and Balaram, along with their friends, would take the cows and calves to eat grass. As described in sastra, one time the boys got hungry and Krsna told them to go request some foodstuff from several Yajnic Brahmanas who were performing sacrifices nearby. Unfortunately, the proud brahmanas refused and the boys returned empty handed. Then Krsna told the boys to ask the wives of the brahmanas for footstuffs. He said they should ask, “on His behalf”. The pure-hearted ladies, devotees of Krsna, immediately agreed and gave rice and yogurt to the boys. Krsna, Balarama and the boys then came up on this hill and happily ate those foosdstuffs. The sadhus who live there now were very hospitable to us. Yet another new place to take devotees next Kartika! 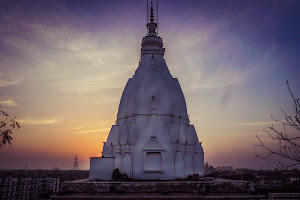 It’s 10:00 pm Sunday night and we’re on our way back to Vrindavan after a weekend of one program after another In New Delhi. Overall we visited 5 temples and had classes and roaring kirtans in each one. There were thousands of devotees! Krsna consciousness is thriving in Bharat Bhumi. Although we’re on our way home, we’ll be back to the New Delhi preaching field soon!
Original post and Video Clip on Facebook