Kamyavan signifies the forest that fulfils all spiritual desires. Our parikrama party took full advantage of our visit there by chanting from our hearts, hearing with rapt attention about the pastimes that took place in the forest there and by visiting a number of sacred temples and other sites. Kamyavan is rich with the history of Vedic culture. 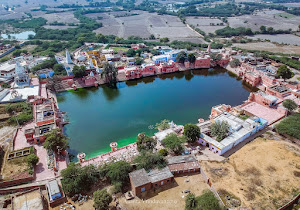 Our parikrama group spent the first day of Kartika at Akrura Ghat, the border line between Vrindavan and Mathura. There we discussed in depth the pastime of Akrura taking Krsna and Balaram to Mathura in his chariot and how the Vrajavasis did their best to keep Them in Vrindavan. Hearing of the gopis sentiments of impending separation touched the hearts of us all.

In this video Ananta Vrindavan das films a morning puja of my Ugra Nrsimha Deity. “Ugra” denotes the most fierce form of the Lord as He annihilates the demoniac king, Hiranyakasipu. Each morning I take great pleasure in bathing this most unique Deity and reciting various mantras in His glorification. By His mercy He protects me in my preaching around the world and gradually purifies my heart, so that I may attain the cherished goal of one day residing in Sri Vrindavan Dhama in service to the divine couple, Sri Sri Radha and Krsna. All glories to Lord Nrsimhadeva!

The other day our parikrama party visited Chiksauli, the village of Citradevi, one of Radharani’s 8 sakhis, or girlfriends. There we discussed in-depth Cirtadevi’s transcendental qualities and services, as well as those of Srimati Radharani. Then we walked the parikrama marg up to and down the sacred Varsana hill. What an amazing day it was! 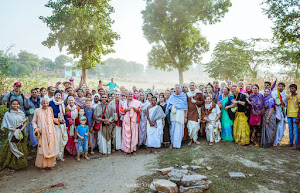 The other day we visited a village with a lake named Prahlada Kunda. The local villagers hold a festival in honor of Prahlada Maharaja there each year, appreciating his love and devotion for the Lord. The other day as part of our Kartika parikrama 2019 we visited Chir Ghat, where the playful pastime of Krsna stealing the clothes of the gopis took place. The nearby village was enchanting and the spiritual atmosphere of Chir Ghat was overwhelming. We discussed the pastimes that took place there and chanted in bliss with Bada Haridas prabhu. I would say that Chir Ghat is a must see for all Gaudiya Vaisnavas who want to go deeper into understanding the science of Bhakti – loving devotion for the Supreme Lord.

Thirty years ago, while reflecting on my duties as a young servant, I wrote the following offering to my spiritual master, Srila Prabhupada. Now in the twilight of my years, it remains my favorite prayer. Today, on the occasion of his Tirobhava festival I place it again at his lotus feet.

This year, in wake of disaster that claimed a friend
And brought the walls crumbling down,
I took up my staff and looked to the road,
Hoping to find you again.

To gain your favor I gave up all that I owned
And tried to renounce my pride,
And evermore cautious of women and fame,
I traveled far and wide.

Moving once in the north and twice in the south
And east and west in turn,
I learned firsthand of God’s creation
And your kind mercy as well.

Soon austerity came, claiming all of my wealth,
But remained a welcome friend,
And strength I gained, and detachment too,
While traveling through foreign lands.

With no place to live, or a home of my own,
I learned to take shelter in you,
And the constant vision of birth and death
Kept me learned and true to my vows.

In forests and cities, villages and towns,
Repeating your words I roamed,
Witnessing your mercy, as kind as you are,
In delivering the fallen and poor.

Disease came in summer and near death in the fall,
In a jungle far to the south.
But your saving grace and Nrsimha’s mace
Kept me safe and protected through all.

Oh, how happy I am to serve you like this,
Always preaching and traveling on!
As a flowing river remains always clean,
I pray to remain always pure.

In happiness and distress, in heat and cold
I want to keep fighting on,
Delivering your message, as you asked me to,
While I’m enthusiastic, youthful, and strong.

But Prabhupada, the road is long,
And there are many dangers in between
Where I pause now . . .
And you rest safely on the other shore.

So on this day, so full of grace,
Please hear my fervent prayer:
Within my heart, beyond what’s dark
There’s a shining love for you.

So guide me right, keep me in the fight,
And away from maya’s glare,
And when all is done, and the battle’s won,
Take me home to be with you again! 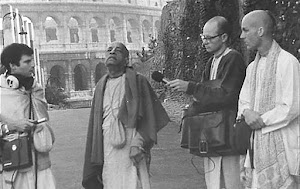 A few days ago our parikrtama party visited Radha Kunda, the most sacred place in the universe. We approached Srimati Radharani’s kunda with all the humility we could muster and bathed in the sacred waters. We also listened to a discourse on Radha Kunda’s glories and relished kirtan and prasadam afterwards. 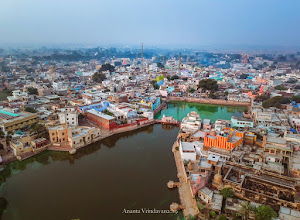